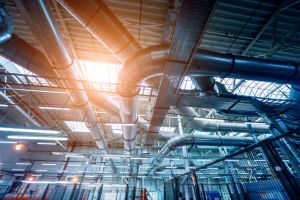 Producing hot water using solar panels is standard practice. However, researchers from Madrid Universities Carlos III and Politecnica hypothesize that solar panels may be capable of providing large offices with both heat and air conditioning. The researchers intend to incorporate solar collectors into a gas-based cogeneration system with an absorption machine. This method will reduce energy expenditure and CO2 emissions if the project succeeds.

This idea isn’t wholly new. This type of project has precedent. Several shopping centers and central stations, such as Atocha Train Station in Madrid, already house trigeneration systems responsible for producing electricity, heating, and cooling. This system uses a gas engine to generate electricity. In winter, residual heat produced by the engine is used directly for the heating circuit. In the summer, this same heat powers an absorption machine that cools water which then provides air conditioning.

In this current project, engineers from the Madrid Universities Carlos III (UC3M) and Politecnica (UPM) have designed a model that allows maximum reductions in energy expenditure and CO2 emissions to optimize the use of this new cogeneration system. Incorporating solar collectors into the model is a feature new to the field. According to the details published in the journal Applied Thermal Engineering, this revolutionary system works best in large office blocks.

The study’s primary author is Pedro A. Rodriguez, a UC3M professor. Rodriguez explains to SINC: “current regulations state that installing solar panels in buildings is only compulsory to meet the demand for domestic hot water, but very few offices have either showers or kitchens. Consequently, the idea behind our proposal is that a part of the demand for heating in winter and air conditioning in summer be met with solar power.”

During the model’s creation, the team accounted for the energy needs of the buildings within the Madrid region. They also compiled data on monthly climatological temperatures and solar radiation pertaining to the area. The system they came up with provides air conditioning or heating according to each office’s specific daily needs, which may vary according to changes in the weather and seasons.