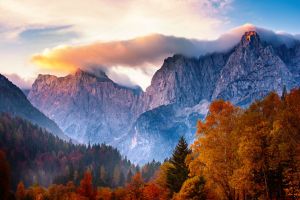 Wednesday brought significant change to the residents of a remote Norwegian village of Rjukan as the ingenious solar mirror system designed to bring natural light to their mountain valley was unveiled. The valley is plagued with darkness for six months every year. They hope that these three giant mirrors will change that.

Hundreds of villagers attended the unveiling, proudly sporting sunglasses as they sought to catch the first rays of sunlight reflected into the valley by the giant mirrors atop the 400-meter (1,310-foot) mountain peak.

After a long wait, the sun made an appearance from behind the clouds, giving the excited locals the first rays of early winter sunlight.

The creator of this miraculous system is local artist Martin Andersen. However, he credits the invention to a century-old idea to reflect the sun into the valley with a solar mirror system. He is simply the first person to bring the plan to fruition.

“From now we’ll have a sun festival every day,” he told AFP. The sun festival is an annual local celebration that marks the day sunlight returns to the valley. Thanks to Andersen’s mirrors, the valley will no longer suffer through the six months of darkness that typically precede the festival.

Organizers said 2,500 people attended the event. School children painted suns on their faces, and many people wore sunglasses that would typically be out of season by now. Sand was shipped in for the day. Attendees sat out on deck chairs with parasols. An orchestra entertained guests as they waited for the sun to hit the mirrors, playing “Let the Sun Shine.”

Many locals had been skeptical when the plan was first proposed. Despite their reservations, the village raised the five million kroner (615,000 euros, $849,000) required to fund the project. Eighty percent of the funding came from sponsors. Now, three 17-square-meter (183-square-feet) mirrors tower over Rjukan village. Some may consider them an eyesore, but they are a blessing to the residents.