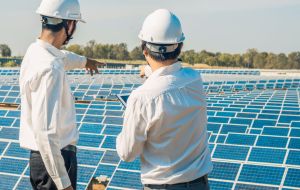 A new report from IHS Inc. forecasts that global photovoltaic installations will exceed 40 GW for the first time in 2014. This dramatic spike in solar installation growth will generate more than $86 billion in revenue.

After a two-year slowdown, annual solar installations will reach 41 GW in 2014. IHS maintains its earlier prediction that installations in 2013 will total 35 GW.

“PV installations will accelerate in 2014, driven by low system prices, new markets in emerging regions, and the continued growth in major countries such as the United States, Japan, and China,” says Ash Sharma, senior research director for solar at IHS. “As the industry’s recovery accelerates and market revenue returns to near-record levels, solar manufacturers will leave behind the turmoil of recent years and enjoy improved business conditions.”

“While PV installations will continue to stagnate or fall in established European markets like Germany and Italy, rapid growth is forecast in emerging countries in the region, such as Turkey, Poland, Ukraine and Russia,” Sharma says. “The growth in the developing PV nations will more than offset the poor conditions in the large, well-established solar markets.”

Despite IHS forecasts that European installations will return to growth in 2014, Europe’s solar installation growth will continue to be outpaced by Asia and the Americas. Europe’s share is expected to fall to 29% next year, down from 57% in 2012. Meanwhile, Asia’s share will climb from 29% to 48%.

According to the IHS, the increased performance in the fourth quarter confirms the industry’s seasonal pattern of a solid finish every year. Incentive cuts at the end of each year drive the surge in installations in the fourth quarter—many rush to complete their solar projects while government subsidies are still in place.