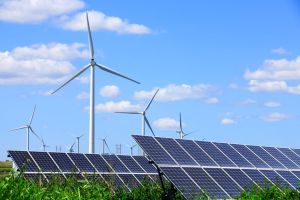 According to the International Energy Agency, China is the number one country for renewable energy production. Their current course of renewable energy expansion is projected to surpass the European Union, the United States, and Japan combined.

The IEA released its annual World Energy Outlook on Tuesday. The report predicted that China will account for nearly half of the increased global power generation by 2035. Meeting this projection will make China a vital driver in the global renewable energy market.

This plan is a crucial step toward correcting China’s place as the world’s largest emitter of greenhouse gases. The U.S. Energy Information Administration reports that 82 percent of the increased global coal usage comes from China since 2011. This makes China the world’s largest consumer of coal. Last year, 67 percent of China’s energy mix consisted of coal. This heavy reliance on fossil fuels has been blamed for the country’s massive air pollution. Renewable energy production is hopefully a solution to many of these problems.

In an interview with China Daily, the IEA’s chief economist Fatih Birol said, “The good news for China playing an active role in developing renewable energy is that it will help decarbonize the global energy system.”

Birol told the newspaper, “The main challenge for global renewable energy today is that it is costly. If China builds a lot of renewable energy projects, it will help bring down the cost and enable it to compete with traditional sources of energy, namely coal and gas.”