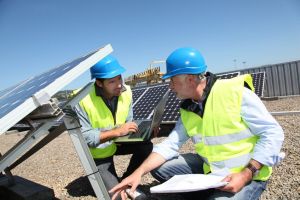 The White House recently announced a 24-month tariff exemption for solar panel products imported from several Southeast Asian nations after increased criticism of inflated energy prices stemming from the war in Europe. The affected countries include Cambodia, Malaysia, Thailand, and Vietnam. This move comes after the Commerce Department’s investigation into the solar industry in Southeast Asia and suspicions of goods from China being trafficked through other Asian countries to avoid tariffs. The investigation has added complications to importing solar products from the region. Imports were temporarily frozen, and projects encountered significant delays during the investigation. The White House attempts to allay companies’ concerns, as they hold billions of dollars in reserve to pay potential tariffs. However, despite the suspension of tariffs on other Asian countries, tariffs for solar products from China and Taiwan remain in place.

“We believe the announcement will be a clear positive for our coverage, particularly within the utility-scale solar market, which has faced uncertainty since the U.S. Department of Commerce’s AD/CVD investigation was launched in late March,” JPMorgan analyst Mark Strouse said in a note to clients according to CNBC.

The Defense Production Act (DPA) is also leveraged to promote domestic production. The U.S. Department of Energy hopes to increase domestic production of solar panels, electric transformers, heat pumps, insulation, and hydrogen-related equipment under the DPA. According to Charisma Troiano, department press secretary, the DOE’s commitment to buy clean energy products from U.S. manufacturers is the first step in boosting domestic production of solar products. Other strategies available to the DOE include direct investments in facilities and financial aid for clean energy installations. These investments include installations in homes, military sites, and businesses.

Energy justice program director at the Center for Biological Diversity Jean Su views this use of executive power as a “game-changer.” This move will establish a manufacturing base to support the renewable energy transition.