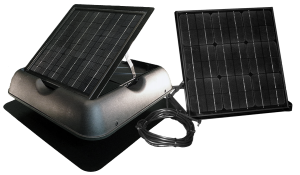 Polycrystalline solar panels provide lower efficiency due to the lower purity of the silicon used to form the crystals. They take up more space, becoming more of an eyesore in residential applications.

Solar Royal has chosen to utilize monocrystalline solar panels in our SR1800 Solar Attic Ventilation Fans in order to provide you with the highest efficiency, most cost-effective product on the market. These panels allow us to provide a lower profile, space-efficient fan that won’t be an eyesore on your roof.